You are here: Home / Blog / Holy Island, The Comic Strip Presents and remembering the eleven million

Memories take us back to a pre-social media world where humour and laughter were shared by voices rather than fingertips.

Gino (Full Story and Pics) was, in my humble opinion, by far the best of The Comic Strip Presents productions.  The episode premiered on 28th Jan 1984 – 30 years ago this week – and I’m proud to say I remember the whole 31 minutes word for word!  Proud or sad?  Watching it again this week with Marion, the friend with whom I watched it the first time around – and many, many times over the decades, we laughed constantly.  Although this time, much of the laughter was based on knowing what was coming next and remembering the humour as we enjoyed it as 18 year olds, working in a London toy store and having no responsibilities other than filling up a shelf full of balloons.

How times change.  But the sentiment doesn’t.  The phrases we repeated, the friends we worked with, the lives we led are all frozen in time when we revert to memories.  Gino is no longer politically correct, but probably wasn‘t in 1984 either. 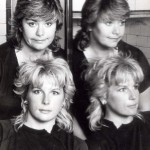 We loved everything that involved Dawn and Jennifer.  Marion and I worked under our maiden names then – hers was Kench, mine was Sanders.  Our colleagues in Hamleys would hum the French and Saunders theme tune as we exited the lift after an extra long tea break: Kench and Sanders, la la-la-la la.  We probably made ourselves laugh more than other people, but still, 30 years later, look at the award winning comedians and wonder if we should have taken our own brand of comedy beyond the basement of the greatest toy shop in the world…

So here we are, 30 years later, watching it together curled up under a duvet in the wilds of Scotland, about as far removed from the dynamism of London as you can get.  What would we have tweeted in 1984?  Gino quotes would have been shared on Facebook, there’s no doubt about that.

Now Marion runs a successful dog walking and pet/house sitting business in the Scottish borders; mother to four kids, three dogs and the chubbiest cat you’ve ever seen without Photoshop.  But when we’re together, we’re still 18.  (She’s new to social media, so it would be great if you could like her Facebook page please.)

We spent a day at Lindisfarne this week. 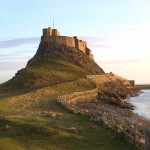 We’ve been before and she’s taken some amazing photos of the puffins that surround the Holy Island shores.  Crossing the causeway is like a surreal Disneyland ride back in time.  Way, way back to an age when flame-haired Vikings raped and pillaged – or introduced new products, bartering their trade in the earliest form of sales and networking, depending which version you believe!

There’s a point beneath the castle walls where you can turn 360 degrees without seeing a single sign of 21st century life.  The breath-taking wilderness is exactly what the monks viewed as they created their beautiful Lindisfarne Gospels in the now ruined priory.

I have business meetings sometimes at the British Library – in the restaurant, usually!  Next time I’m there I’ll ask to see the 1300-year-old Gospels, now I know their history and the painstaking methods employed to create them these fantastically beautiful scriptures.

Holy Island abounds with stories of the ancient wars and attacks by merciless foreigners intent on killing.  So, how apt to be posting this on Holocaust Memorial Day.  Possibly, as you’re reading this, I’m at a memorial service in my local park, remembering the eleven million innocent people slaughtered at the hands of a vile and abhorrent regime.  I wrote recently about my cousin’s part in liberating one of the concentration camps; if you missed it, you can read it here.  Oh, for a tolerant and compassionate world…

“Some expressions take me back, like hair of gold and sweet Mary, and running to me.  The sweet, sweet songs that cloud your eyes, nostalgia supplies.”  (Bought the album when I worked with Marion; still play it, still recommend it!)  If you’re seeking a lasting expression to make a lasting impression, ask me about copywriting: @WeekendWitch.

(Photos courtesy of Mail Online and NorthoftheTyne.co.uk, with thanks.)


We use cookies to give you the best website experience. If you continue to use this site we will assume that you are happy with it. Ok, thanks.More about cookies